Are you ready to communicate?

Would you like compelling copy and communication strategies that will make your public listen?

Current public relations chair and a member of the District's public relations team. Wrote the forward for two books published by the group: one of which was a recipe book during the pandemic, the other was a collection of art and poems from local 9-year-olds responding to the prompt "What is Peace"

Headed fundraising in Nebraska for the creation of the Holocaust Memorial Museum in Washington, D.C., including the planning and presentation of fundraising events

Created newspaper articles and ad copy and the planning and organization of a trip to Bermuda honoring top personnel. Wrote a memory book for those attending

Produced numerous other plans, public relations, and marketing plans for a variety of companies, individuals, and organizations during her PR, writing, and advertising career 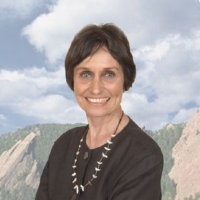 Jancy grew up in Omaha, Nebraska, where she graduated from the University of Nebraska in Lincoln, NE, with a degree in journalism. Moving to Washington DC with her husband, she worked for a United States Congressman from Michigan. Later moving back to Omaha, she became a full-time mother of three daughters along with completing her masters degree in mass communication. Her communications career continued as a public relations executive at Bozell Jacobs, one of the top ten advertising and public relations agencies in the world at the time.

Admiring Colorado, Jancy moved to Boulder and spent a couple years as an adjunct professor in the School of Journalism at the University of Colorado. Her interest in the landscape of Colorado shifted her career into real estate, where she worked for many years before starting a communications venture as Campbell Communications.

Strongly believing in giving back to her community, she:

Need help with your communication efforts? My line is open; please reach out for a consultation. Email: [email protected]Call/Text: (303) 931-9663